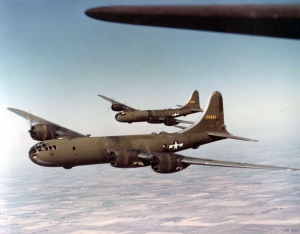 The B-29 Superfortress is a four-engine propeller-driven heavy bomber designed by Boeing that was flown primarily by the United States in late-World War II and through the Korean War. The B-29 was one of the largest aircraft to see service during World War II. A very advanced bomber for this time period, it included features such as a pressurized cabin, an electronic fire-control system, and remote-controlled machine-gun turrets. The name "Superfortress" was derived from that of its well-known predecessor, the B-17 Flying Fortress. Though the B-29 was designed as a high-altitude daytime bomber, in practice it actually flew more low-altitude nighttime incendiary bombing missions. It was the primary aircraft in the American firebombing campaign against the Empire of Japan in the final months of World War II, and carried out the atomic bombings that destroyed Hiroshima and Nagasaki. Unlike many other World War II-era bombers, the B-29 remained in service long after the war ended, with a few even being employed as flying television transmitters for the Stratovision company.
The B-29 served in various roles throughout the 1950s. The Royal Air Force flew the B-29 and used the name Washington for the type, replacing them in 1953 with the Canberra jet bomber, and the Soviet Union produced an unlicensed reverse-engineered copy as the Tupolev Tu-4. The B-29 was the progenitor of a series of Boeing-built bombers, transports, tankers, reconnaissance aircraft and trainers including the B-50 Superfortress (the first aircraft to fly around the world non-stop) which was essentially a re-engined B-29. The type was finally retired in the early 1960s, with 3,970 aircraft in all built. While dozens of B-29s have survived through today as static displays, only one remains on active flying status.
A transport derived from the B-29 was the C-97, first flown in 1944, followed by its commercial airliner variant, the Boeing Model 377 Stratocruiser in 1947. This bomber-to-airliner derivation was similar to the B-17/Model 307 evolution. The tanker variant of the B-29 was introduced in 1948 as the KB-29, followed by the Model 377-derivative KC-97 introduced in 1950. Later jet-powered models from Boeing carried on the lineage, including the B-47 Stratojet and B-52 Stratofortress bombers, as well as the "Dash 80", from which today's modern airliners are evolved. A heavily modified line of outsized-cargo variants of the B-29-derived Stratocruiser is the Guppy/Mini Guppy/Super Guppy which remain in service today with operators such as NASA.