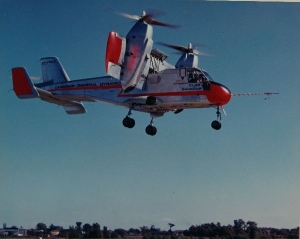 The Canadair CL-84 "Dynavert", designated by the Canadian Forces as the CX-131, was a V/STOL turbine tiltwing monoplane designed and manufactured by Canadairbetween 1964 and 1972. Only four of these experimental aircraft were built with three entering flight testing. Two of the CL-84s crashed due to mechanical failures, but no loss of life occurred as a result of these accidents. Despite the fact that the CL-84 was very successful in the experimental and operational trials carried out between 1972 and 1974, no production contracts resulted.