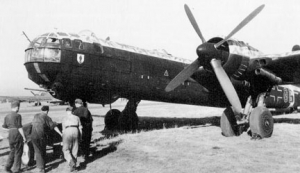 The Heinkel He 177 Greif (Griffin) was the only operational long-range bomber to be operated by the Luftwaffe. Starting its existence as Germany's first purpose-built heavy bomber just before the war, and built in large numbers during World War II, it was also mistakenly tasked, right from its beginnings, to perform a milder version of the precision dive bombing the Junkers Ju 87 had pioneered during the Spanish Civil War. This requirement for a dive-bombing capability in such a large aircraft resulted in a design possessing considerably lower drag than any other "four-engined" heavy bomber of its time, in order to be able to perform the task in any measure, resulting in many major deficiencies being exposed in its general design, and hindering its widespread adoption for strategic bombing. Luftwaffe aircrew nicknamed it the Luftwaffenfeuerzeug (Luftwaffe's lighter) or the "Flaming Coffin" due to the serious engine problems on initial versions of the aircraft. When these problems were later rectified, the type was successful, but it could not be deployed in large numbers due to Germany's deteriorating situation in the war.