Vintage Wings of Canada: Of memories and wings 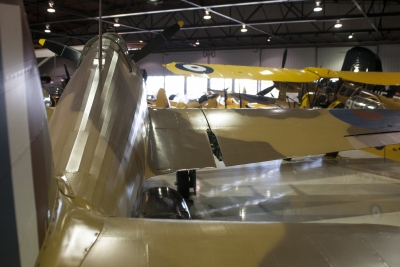 Founded in 2007 and based at Gatineau, on the outskirts of Ottawa, ‘Vintage Wings of Canada’

saves more than just aircraft but also the memory of those who wrote the book of Canadian aviation
history over the preceding decades. Each machine they preserve is dedicated to the memory of one
of the pilots who flew it.

This collection, which uniquely aims to protect and preserve Canadian aviation heritage is the work
of Mike Potter, a technology entrepreneur and philanthropist. In 2000 he acquired a Spitfire
Mk XVI SL721. This aircraft, which was built in 1945, was the personal ride of Air Marshal Sir James
M. Robb. Then, in 2003, Mike Potter decided to have the aircraft repainted in the scheme and colours of
Flt. Lt. William Harper of Niagara Falls. Following the success of this aircraft at air shows, the idea
was sown to establish a collection, dedicated to the memory of Canadian aviation. Financed
by Mike Potter the Vintage Wings of Canada hangar opened its doors in 2007. Today, the collection
includes 13 aircraft, of which 11 are based at Gatineau and 2 in Alberta.

There is an impressive inventory:

The results obtained from previously sub-contracted restoration work, and in particular that of the
Swordfish, convinced the organisation to develop their own skills. These were initially practised
on relatively simple projects and have since expanded, enabling Vintage Wings to be recognised
today for excellence in restoring ancient aircraft. Interestingly, following the visit at the beginning of
November, it was possible to see the work undertaken on the wing of the Spitfire MkIX and on the
Hurricane XII which should be the next machine to take to the air.

The biggest challenge for Vintage Wings today is finance. Mike Potter continues to support
substantially the annual operating costs, which amount to some $4 million, but the support of
corporate sponsors and the public is needed more than ever to keep the collection airworthy.

Vintage Wings offers members have the opportunity to fly aboard the collections’ aircraft. The P-40

is one of the rare examples of this type with dual controls. We’ll talk about this again soon…

Questioned about which aircraft could join the current collection, the Martlet (F4F) and the Canadair
Tutor are the names most often mentioned.

The organisation participates at its own annual air show and numerous commemorative meetings.
At these events, Vintage Wings continues to keep alive the aspirations and memories of the
Canadian aviators and all those who wrote about, or maintained flightworthy, these legendary
machines so as to present them to one and all.